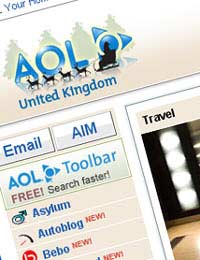 AOL or "America Online" are well known amongst the Internet throng, and have had a presence on the web ever since it was created. Formed in 1983 as Quantum Computer Services, and operated by Tim Warner they are one of the giants in the world of the web.

It is a global Internet and services and media company and it has offered franchises of its services to companies all round the world and created international versions of it services. AOL have a presence in other areas, including the film industry. Even today, if you have visited a cinema recently you may have seen the "Time Warner" logo in action. Yes, they even sponsor movies!

For a brief period in the 90's there followed a number of smaller ISPs all offering a way to connect to the net, and some even offered the service for free as long as you didn't mind the odd advertisement appearing on your screen. However, ironically and back in 2008 we see the old situation of perhaps just a few hundred ISPs offering a method to connect to the Internet. In the early days of the net, there was just a few ISPs, including AOL.

The ISPs of today however, are providing a much better service than they used to and today it is not about dial up (although you can still get it), but about broadband services. The mobile phone companies have now got in the act and some offer free mobile Internet if you subscribe to a suitable mobile phone contract.

Throughout all the changes, AOL have carried on regardless. It is testament to the stability of the company that they have lasted the course despite an ever increasing number of competitors and alternative ISPs, but as we mentioned at the beginning, AOL now have their fingers in "other pies". They are much more than just an ISP however, as we will discover...

They were known to have a community of users called a "walled garden", and at one time their membership was known to be about 30 million users globally.

They created the first online fiction series in 1988 and developed a play by email game, "Quantum Space." They are also famous for creating the original Dungeons and Dragons game, a massive online multiplayer game in 1991. Amongst their many talents they also created the first room-based text role playing game "Black Bayou" between the years 1996 and 2004. This was a horror role playing game.

So you can see there is much more to the eye than just a massive ISP where AOL is concerned. Next time you see the "Time Warner" logo at the cinema you will know where it comes from!