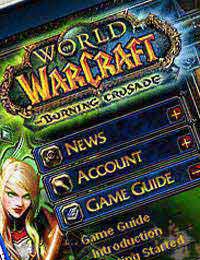 “World of Warcraft” (WOW) is currently the game of choice amongst the Internet gamers out there. It has taken the Internet by storm. The next big release is on November 13th, 2008 and is called “Wrath of the Lich King.”

For anyone having children who play, it’s difficult to get them to bed. Most games are addictive but this one is so addictive that some kids work “full time” on it. This is not too good from a health and well-being point of view, but it’s happening. Kids just won’t come off it unless they are physically dragged away from their seat. It’s games likes this that prevent children doing what they used to do. You know, things like going to the park or playing football, riding a bike even. In fact, come to think of it, how many kids do you see riding bikes these days? It’s a sad fact of life, but in some ways the Internet has ruined traditional activities. However, that’s another subject entirely.

So what is it about WOW that makes it so special? Is it the fighting, the heroes or the hundreds of options available? World of Warcraft has been designed in such a way that the challenges are never ending. You can actually reach level 80! In the old days computer games only had five or six levels. WOW is designed with both scalability and sellability in mind. It is possible to play for months and never get bored. Why? Well if you become fed up with the way your character looks you simply change it. If you need to acquire more talents and abilities you set about obtaining them. It is even possible to set up your own allies in what is known as a “guild”. It is also rich in scenery. You don’t even have to fight if you don’t want to. You can simply go for a walk in a beautiful (or hellish, it’s up to you) forest. The whole experience consists of so many twists, turns, options, weapons and choices that no wander it is appealing to our youth! It is the role playing opportunity of the millennium!

Blizzard Games are Not Small!

The official website www.worldofwarcraft.com explains the rules of WOW and a guide. The software and hardware used to support the infrastructure required competes with many commercial companies and organisations. WOW is played world-wide, and therefore it needs a team of programmers, and substantial hardware and software to support it. It is the creation of games company “Blizzard” the game director is Jeffrey Kaplan. Another big hit for Blizzard is “Warhammer Online”. The Blizzard organisation specialise in Internet gaming. WOW was Blizzard’s fourth release in the fantasy Warcraft universe. The idea of a “Warcraft” was first introduced in 1994. It has developed into the latest (huge) version of the original concept.

Just to put the popularity of WOW into perspective, it has 10.9 million monthly subscribers. It is currently the world’s largest Massively Multiplayer Online Role Playing Game (MMORPG). It is mentioned in the Guinness World Records as the most popular. In its own right WOW holds approximately 62% of the Massively Multiplayer Online Game (MMOG) market.

In the early days of computers, role playing was restricted to text based responses to text based questions. Now there are virtual worlds, challenging levels, hundreds of characters, weapons and talents to acquire. In some ways it is educational. It certainly challenges the player to come up with original ideas and to use their wits when in battles.

The game has also created “experts” in the field, who have acquired a fan base . “WOWHobbs” is well known all over the world for his expert opinions, views and tips. He has a large following on both You Tube and has his own blog. If you carry out a search on Google for “WOWHobbs”, you will see hundreds of entries. “Hobbs” is his user name on the World of Warcraft. He has become a recognised authority.

WOW has taken the gaming world by storm and Now Blizzard is looking at the console market. Traditionally they only work with PCs, as they claim their games work better that way. However, now Sony are taking an interest, so that could all change. Maybe soon WOW will be available on a Sony console.