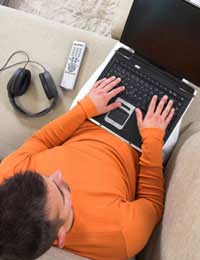 Is this a real disease? Some people think so.

It all started out as a hoax, or even as a joke, by a gentleman by the name of Ivan Goldberg M.D. in 1995.The problem is if you are a recognised medical professional things you say tend to be believed!The supposed hoax was based on the same model as gambling addiction, which has been included in the Diagnostic and Statistical Manual of Mental Disorders (DSM). The manual is revised occasionally and the current version is DSM-IV. DSM-V is currently in progress.

It is common to spend a lot of time online due to the numerous activities offered on the web. However, perhaps some of us lose reality of life around us as we spend far too much time surfing the web. It is possible to spend whole days online playing games, browsing, or working as some jobs these days require internet access. However, these could not all be classed as an “addiction”.

The IAD disorder has gained support as a real problem and not just a hoax. People are campaigning to include the disorder in the DSM. The supporters of IAD believe that if it can gain acceptance it will open the doors for insurance companies to pay for IAD counselling.

The supporters attempt to justify the "Net compulsions" by categorising the problem into :

Some of the milder terms for this condition are "problematic computer use", as a opposed to the more serious "pathological computer use" or “addiction”.

However, there may be a grain of truth surrounding the theories of this condition. For instance, the Computer Addiction Study Centre at Harvard University claims that between 5 and 10% of internet surfers have some kind of web dependency. Kimberly Young (Psy. D.) a researcher wants to include IAD into the DSM-V.

Some people have actually been treated for IAD, but the problem was then relabeled as Attention Deficiency Disorder (ADD) or depression. Some people have even become self proclaimed sufferers and have even taken their case to court. One such case was the case of Pacenza v IBM Corporation, where Pacanza claimed that his case was illegally dismissed due to the "Americans with Disabilities Act", when in fact he claimed that his IAD was triggered by the war in Vietnam and his Post Traumatic Stress Disorder.

Whatever you think about IAD, it is an unusual disease and most people would claim it is fictitious, rather than a real complaint. Doctor Goldberg did state that rather than being an actual disorder, it could best be described as a combination of other disorders. This is even agreed by its supporters, in that some labels are more appropriate than IAD. In the case of the Vietnam veteran this could well be true. At the end of the day it depends on your point of view. Is the internet an addiction? Possibly but it is more likely that it is a compulsion, and not in the realms of addiction, which has much more serious connotations.

All About Fictitious Diseases online
Share Your Story, Join the Discussion or Seek Advice..
In Korea, for instance, there are people who have been treated for addiction to being online, in residential programmes. I believe the general consensus is that it’s a real problem and one that’s only going to grow worse as a new generation grows up with the Internet as one of their foundations of communication and entertainment.
tim - 26-Sep-12 @ 1:27 PM
Title:
(never shown)
Firstname:
(never shown)
Surname:
(never shown)
Email:
(never shown)
Nickname:
(shown)
Comment:
Validate: